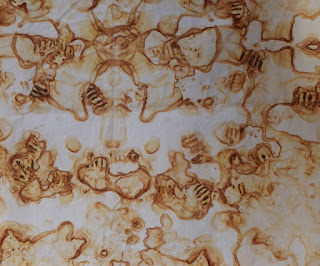 While in Philadelphia I participated in a workshop by Lorraine Glessner was about mark-making. I learnt so much and took techniques and processes I'd used previously to new levels. Rusting was one such part - and here's a piece that has spent the past three weeks developing itself ... it was still wet when it arrived home with me yesterday. This is an "exchange piece" from one of the other students in the group - we all brought along bits of metal and found objects ... there will be many more pieces to emerge and accompany the rubbings I made on already rusted fabrics (using iron sulphate and tannins with Ankie before heading off to Philly) that also made it home. The first, with the backdrop of part of the USA side of Niagara and the second on a rather large pot of emerging tulips - made me think of Ankie and Linda. Shiva sticks perform quite differently in freezing temperatures - at times it felt like grating frozen butter - not to mention the absence of feeling in the fingers - however it was superb fun. 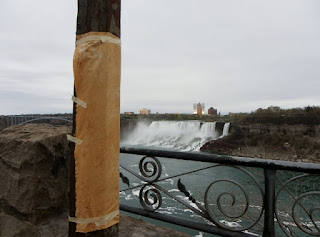 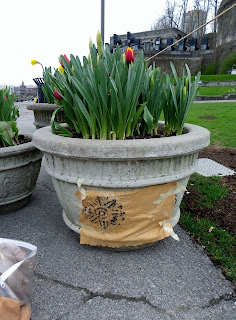