Pinon Gallery ... an adventure in clay

﻿ ﻿ While in Colorado in September Judith took us to visit various artists including Nicole Copel and her clay ... unbelieveable. The exposure to different artists and types of artistry is wonderful. Nicole's passion for clay and the studio just oozes. The Pinon Hill Pottery is a must visit in La Veta.
Anyway - this is a little tribute to all the wonderful potters and potters -in-the-making, especially on the Isle of Man ... where it must be oh -so freezing cold and difficult to throw a good pot.
﻿﻿ ﻿﻿ ﻿ ﻿﻿ ﻿
Posted by Unknown at 21:09 1 comment:

﻿﻿﻿﻿ ﻿﻿
It's been a long week away from the computer and with no time for stitching ...almost. We spent the weekend at Cooran where my cousin hosted my aunt's 80th birthday celebrations -a family reunion with a birthday cake to boot.  It was every person for themselves for accommodation - and by chance we found Cudgerie B&B just near Cooroy and Pomona.  This place had it all - great hosts in Veronica and Steve (he also has the fruit shop in town), generous spirit (one daughter marvelled at the large box of Lindt balls sitting beside the hot beverage station) beautiful rooms with own toilet and shower, airconditioning if you need it, big verandas and multiple breakout areas. There's also a beautiful pool ... and I'll let the pictures speak for themselves. I was thinking weekend away ... quilting, sewing, relaxing, vegging out ...
Cudgerie has five double rooms and a single room - all very close to Noosa and yet far enough away to be another world. The breakfasts are worth the trip - Veronica kind of redefined "continental" ... we were glad we hadn't gone for the full cooked breakfast as we'd have never been able to eat it all. Fresh fruits, yoghurts, bircher muesli, freshly baked muffins and gentle conversation. It was all  good ...
This place would be perfect for another getaway - and even more so as a quiet retreat - it can be self-catering ... or not. Everything seemed to be negotiable and no trouble. So if anyone is interested in Cudgerie ... Veronica or Steve would be happy to accommodate. Veronica and Steve can be contacted through their website link or on  (07) 5442 6681

In between couching river systems, embroidering fences and button houses I visited the little people in the vegie garden. WMBM has pulled the garlic which is now drying on the fence. 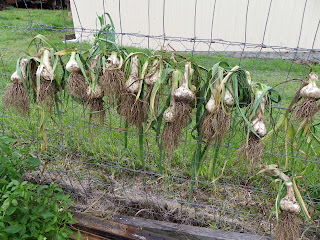 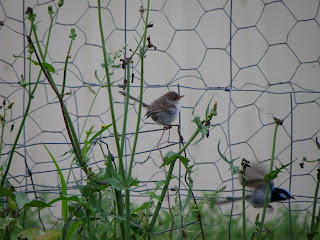 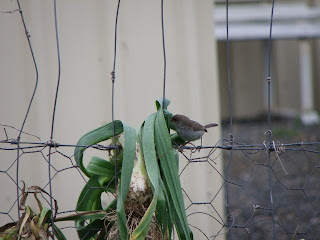 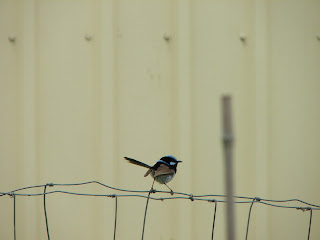 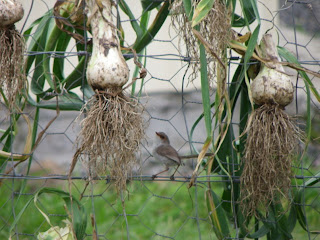 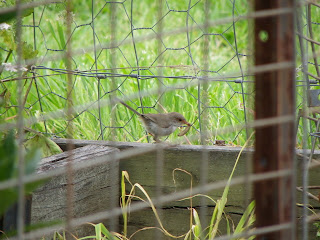 Email ThisBlogThis!Share to TwitterShare to FacebookShare to Pinterest
Labels: wrens

Journal to Quilt at the Guide Hut

Yesterday was a real treat spent with friends at the Boonah Guide Hut. Discharge, printing, burning and stitching was the order of the day for most - while Kate and I progressed different projects from a safe place at the back of the hut and right near the tea and coffee station. Perfecto! The lake has been made and bonded to the front of the quilt with vliesafix (or "phisohex" as I heard it called - very cute and now stuck in my head). The vegetation / bushland surrounding most of the lake has been created by ruching ribbon - from a hank of Oliver Twist. I love Oliver Twist because of the multiple textures and colours through the gorgeous threads. Sumptuous. ﻿

There's a little bit of rubefaction happening here - not too much of course - I'm looking for balance (aren't we all) and love the way the pinks and reds in the ribbon combine. They are similar in shades to all the new growth on the grevilleas at present. Love the texture of the whole thing.
The feather stitch is in two different shades of gold thread interspersed with blue cotton sewing thread.
﻿More foliage and fence lines, a building and some infill. Stitches include long and short satin stitches in different silk threads, running stitch, french knots and more ruched ribbon. Thanks Robyn, Meredith, Kate et al for a wonderful day at the Guide Hut.
Posted by Unknown at 10:05 3 comments:

﻿
At last the pieces are together - which means it's back to the drawing board of sorts. This piece becomes the "blank canvas" for the next layers of the quilt and the andrenalin is flowing. In truth it's flowing because one of those long slithery brown things and I just had a conversation over in the entertainment area. Basically we agreed to go our separate ways, fast. Once my knees stop wobbling I'll go back using the "lightning never strikes twice" theory.  A bit of personal growth - I didn't scream or carry on this time. Just scooped the little dog up under my arm and headed back to the house. And another thing ... only someone who's NEVER come face to face with one of them could suggest that if ever bitten to stay calm ..... yeah right. There's not enough valium in the world at that moment . For now it's back to the studio
Posted by Unknown at 13:46 2 comments:

Journal to quilt - the indigo version

﻿The decision to go "blue" was easy. After mucking around with different colourways and "literal" fabric,s the pile of Indigo from a day with Ankie was screaming to be used. I'm most grateful. The original journal drawing now looks like this and I'll start working on the individual "paddocks" and other pieces this weekend. My only complaint about being in a frenzy of creativity is that life speeds up and it feels like I'm hurtling through the living and working dimension. What has been good is to run out of time to keep going last Sunday  - and enjoy a margerita with Lorraine - because standing back and taking a breath is somethingI forget to do. The door to the studio is closed and I won't open it until tonight ..... progress will be posted over the next few days.Feedback always greatly appreciated - any comments on the balance / flow (or lack of it)? Feel free to contribute, and thanks. 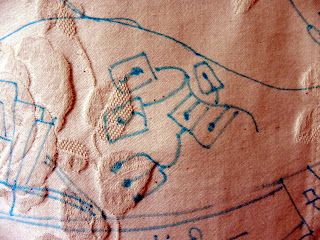 ﻿In words its a beautiful piece of damask that I acquired at the 2QAQ swap and sell day - about A3 size - and I've drawn up from the journal at about 2:1 ration.
Didn't show up well enough with the vanishing pen, of course, so the computer has turned the fabric red temporarily for a better blog experience!
The key template pieces have been cut - looking at shapes that will give the piece some unity, balance and a sense of space. Yes, I have been reading the SAQA University pages - most helpful and I'm trying to work under the umbrella of that awareness and looking at other people's work to understand what makes "it" work.
Fabric options are endless - so I'll have a play and see what "works".
﻿﻿﻿﻿

Live from the studio ... Journal pics

﻿
﻿ The amalgam of paddocks, highways, interchanges, residential estates and farms - waterways, motorways and varying heights - the change in perspective occurs during the flight - we climb - we descend - and all the time I'm drawing whatever is out the window.
I've included another page of the journal - from another flight - this time in Australia - different paddock, different day , same world.﻿
﻿
Different landscape and density flying to Brisbane earlier in the year - I've added notes on beads, ribbons and such - ways I might be able to add texture. And it won't happen if I don't get off the computer and back across the hallway ...
Posted by Unknown at 08:35 No comments:

From the air ... Journal to Fruition III - going "live"

On our trip to the US in September one of the last legs was to fly to Chicago from Nashville to catch the mighty Amtrak South West Chief back to Los Angeles. Some people hate the time they spend in 'planes. I don't - I 'm not too impressed by the time spent in airports but I love getting into a tube of aluminium and  hurtling across the landscape. It's all about the different perspective. I love to journal the "blocks" - and one of the next "day projects" is to transform the journal drawing inspired by the view to an art quilt.  That's the plan for today ...and I have until 4pm when Lorraine and Keith come up to celebrate the removal of her plaster cast with ... Margaritas and kebabs on rosemary sticks ...  I'll keep posting as the day progresses - sort of my first live post ...
Posted by Unknown at 06:57 2 comments:

﻿
﻿﻿
﻿
﻿﻿ ﻿﻿ If you got this far then all you need now is to let it dry for 24 hours or so ... this may now entail me actually putting hand to vacuum cleaner or similar. When completely dry it will need to be heat set, washed and hopefully it will be another finished the piece by tomorrow. Ankie  - you have absolutely no idea what you have let loose in my head .... thank you.
Posted by Unknown at 14:35 1 comment:

﻿﻿﻿﻿﻿﻿﻿﻿﻿﻿﻿ ﻿﻿﻿﻿﻿﻿
﻿
﻿﻿﻿﻿﻿﻿﻿﻿﻿﻿I used to spend a lot of time in little 'planes popping about the Gulf and Cape country in far North Queensland. That's when I started journalling in a serious sense - trying to capture the brilliance of the landscape and the trance that kept my face pressed to crackled plastic windows - imagining the land below without the milky UV battered overlay of plane plastic. ﻿﻿﻿﻿﻿﻿I learned to draw at anywhere between 5000 and 12000 feet ... turbulence notwithstanding. Sometimes the eddies and currents between Mornington island and the mainland were hypnotic. ﻿﻿﻿﻿﻿﻿﻿﻿﻿ ﻿﻿﻿﻿﻿﻿﻿﻿﻿
﻿﻿﻿﻿﻿﻿﻿﻿﻿A few hours later the landscape changed to infinite layers of orange and blue and spinifex sage. The rise and fall of the dirt was as captivating, to me, as the dugong that grazed nervously near Bentink Island. Always the lines ... the stitching lines.﻿﻿﻿﻿

﻿﻿﻿﻿﻿The linocut was the result of the dirt lines and Gulf swirls. In its original form, it became the basis for some experimenting on silk ... which was the subject of a much earlier blog  ...  and now (in a modified form - more work, more detail, more flow and hopefully more balance).﻿﻿﻿﻿
It lives again with direct printing onto fabric and became the basis for a screen print where Ankie showed me how to dissolve the dried print in manutex over several scrapes. We made three or four individual pieces of fabric - as the number of passes over the screen increased, the manutex did a great job of breaking down the darker dyes ... the result (below) was quite delightful and unexpected. ﻿﻿﻿
﻿﻿﻿