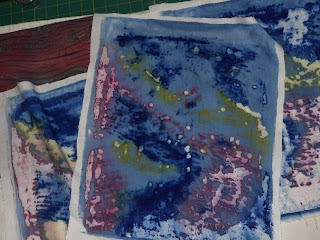 I get to travel a lot, although less often now than in previous years. For a long time I frequented the far north of our State - the Gulf Country, Far North Queensland and the island communities of the Torres Strait. I learned many valuable life lessons about the power of silence, respect through listening and a non-Western literacy derived from sensory experience and observation. I learned about being quiet. Between Mornington Island and the Forsyth Islands lies the Denham Strait (separating Mornington and Denham Islands). I used to watch this narrow body of water of an afternoon, waiting for sunset and longing to cool off in the pristine water.  The idea of becoming dinner for something else in the food chain ensured I never once strolled the water's edge. Ever. Those memories, of brilliant blue water and orange red sunsets set against the swirling, fast running waters of the islands inspired a lino cut that has changed with the ebb and flow of the gulf tides.  I created many prints - on paper, on telephone book pages, on metallic backgrounds, over commercially printed wrapping paper, on tissue, silk and other fabrics.  Encouraged by Ankie King, we made a print of thickened dye onto a silkscreen then proceeded to make a number of breakdown prints. One of those breadown prints became "Oceania - My Home".

The lino cut started as a representation of the swirling waters between Denham island and Mornington Island. the white sand cliffs and water's edge, the myriad of sea life - a place that is ever changing yet timeless.

The original cut morphed - from simple lines and curves to its current and more complex state. I printed on everything I could imagine during the cutting process - tissue paper, silk, commercial wrapping papers. For the purpose of demonstrating the process, I've used a different linocut (below) to show how Gulf Streams, and subsequently Oceania - My Home was created.
The sodium alginate (Manutex) was prepared the night before - instructions come with the product and it needs to thicken for a few hours - the longer the better. I used Procion MX dyes mixed with sufficient Manutex to allow drip free hand painting of the lino cut.

Think about the empty spaces - when the print is pulled, odd and wonderful things can happen in those so-called "empty" places.
Clean, clear manutex was syringed across the top of the screen print space. I used a ruler (formerly one of those templates where I lost the instructions and inclination) to pull the manutex across the dried print. The wet manutex started the process of the dried print breaking down. After each print I wiped away the manutex and re-syringed fresh for the next print. This was because during the print process, the manutex took up some of the dye colour. I could have left it ...
There isn't much of the original print left. This was the last print made and (below) the four prints after being left to batch (wrapped in plastic film and left for a few days).
Compared to the direct print for gulf streams  - I found the breakdown process a more interesting outcome - the elements of change and decay better portrayed. After the print had dried, I then overlaid the printed fabric on the linocut and used a gold Shiva stick to pick out highlights or areas that were less distinct. The border of "Oceania - My Home" was made from black cotton fabric, pole wrapped and discharged with bleach - it symbolises a loss - of culture, of song men, of elders ... of many things. The pole wrapping of the fabric is based on the five poles beside the arrivals shed at Mornington Island airfield - one pole for each of the five Mornington Island people who died in a 1999 plane crash near Bentink island.
Posted by Unknown at 01:00

Thank you for this glimpse into a corner of the globe so far from -- and so unlike -- my own. Beautiful work!

Thanks for sharing the process - and just as important - the story behind it.

What a fascinating process, Ali - thanks for sharing!