This is not a bookcase ... Salem 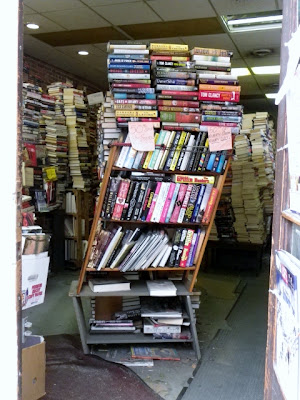 This actually is a bookcase in the entry to a bookshop in Salem. Seriously, would you walk past it?  This is no magic trick,  just book stacked on book after book after book ... and I wasn't going to be the one who squeezed by it - I could already hear the WMBM in my head saying something like "mmmm .... that went well ..." so a picture of said bookcase instead. I loved walking around Salem, claptrap souvenirs and plastic junk aside, the buildings are beautiful and I sometimes thought I was on a movie set rather than a real town - however some oil stains on the road confirmed this was a real place, with real people and real oil-leaking cars. Enjoyed a gorgeous yarn shop "seed stitch" where I was almost compelled to buy one of those french knitting gizmos where you wind and wind a handle (instead of looping over a nail) - had visions of landing in Brisbane later in the week after 30 hours of winding ... and decided not to take leave of my senses.  Now check out this found objects piece of footpath from back in Brattleborough  - embedded in the pavement were all sorts of wonderful things like pliers, cog wheels and giraffes. 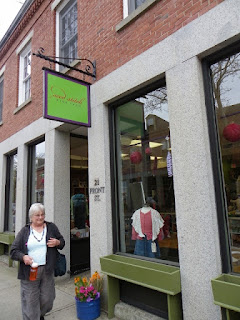 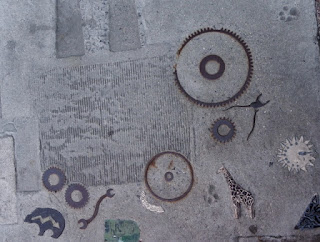 Email ThisBlogThis!Share to TwitterShare to FacebookShare to Pinterest
Labels: Salem