Santa Monica, Singers and Such 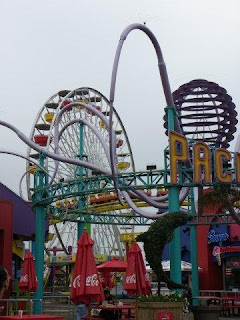 A trip to Santa Monica Pier was the final destination before heading back across the pond to Brisbane. I'd even emailed the restaurant at the end of the pier to make a reservation for lunch and, until the moment below which is self explanatory, I couldn't understand why they never responded. The karma wheel moves as mysteriously as the goddess - and thankfully we weren't obliged to dine or have our margaritas - and have that fantastic experience ...dulled. Tip for travellers: If you are intending to travel to SMP and take a taxi from near the airport it will cost you around US$50. If you take the blue bus rapid express  ... it will cost you US$1 (for the under 60s) or $0.50 for the over 60s.  Each way. Go figure. The bus was surprisingly, or not so surprisingly, faster and a much shorter trip. The SMP park is really small - but then you won't find a Dreamworld or Movieworld able to fit on a few planks of timber either - it was such a colourful place in the midst of the grey and misting rain.  Next to no one participating and surrounded by closed shops, takeaway and touristy things - it's a sharp reminder of the absence of disposable income. ﻿﻿ 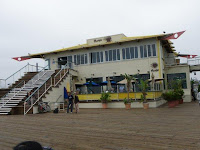 This fine establishment is located at the end of SMP. The dream was to sip margaritas on the edge of the Pacific Ocean - and wake up in the morning on the other side of the pond. It was a good plan. Luckily we didn't wait 'til SMP to try margaritas. Grotty  doesn't begin to describe it ... to be kind, maybe the GFC has impacted far more than I'd previously considered. 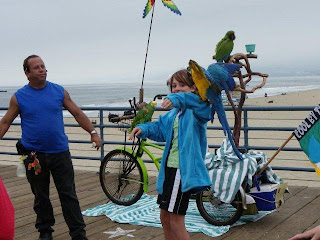 Enterprise is everywhere - for USD$5 or so you can have one of this man's birds climb up your fingers and take a treat from your fingers. Birds are rotated regularly and given breaks. A "fistful of dollars" took on new meaning and at least the guy has to look after his birds or the income dries up ...  What did they think of the performing humans? 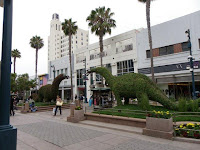 Santa Monica Shopping precinct is stunning - a complete opposite of the nearby pier. Fresh, flashy - and for the tourists.  Neil Sedaka was appearing at a book signing after lunch - it was such a pity we ran out of time. And our favourite place was ...... 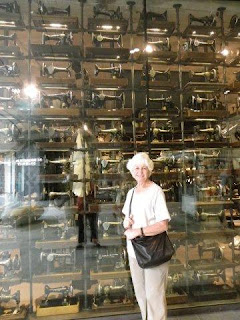 this menswear store - from London no less - where the walls were glass and instead of curtains or anything else - wall to wall, floor to ceiling - sewing machines ... all different brands makes and models but all old, old, old ... we stopped counting at around 900 ..... unbelievable! John Watts eat your heart out.
Posted by Unknown at 10:09

so sorry about your disappointment with the restaurant...I wish I could have warned you :(

It was fine - we didn't go there but enjoyed the other experiences - and life works itself out that way, doesn't it. Thanks for your feedback - we really did enjoy Santa Monica and learned an important lesson about website advertising.