It's the first day of sunshine - the good news - in many weeks. It feels like  the windiest day on record - that's also good news. Oh dear. Had to stay inside for fear of losing my feathers. It's a mixed bag today - bread baking usually happens on Saturday - and thread making seemed to be a great way to fill in the gaps. First things first - get the dough kneaded and into the first rise. Given the temperature and generally cold start to the day it takes about an hour and a half to get to the point of punching it down - in summer that can be as short as 50 minutes - and then the four loaves get another hour or so to double in size before baking. 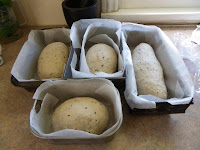 Which is a perfect time to get into the studio (supervising the bread of course) and get into some thread recycling. Since it has stopped raining - at least for the next few days - it's safe to get the roll of soluble plastic stuff out of its protective packet - I live in fear of it all turning sticky  in the humidity - all was well. While the first rise was occurring, I got into the thread tidy and dug out loads of bits and pieces from heaven knows when - and machine "quilted" it all in copper thread. Had a bit of trouble, even using the metallic needle - I take it easy to start with and then get carried away - and of course, the thread breaks. However it is a really fun thing to do - and worth a few re-threads.
I've also used chopped up bits of this stuff in landscape as tufts around the base of fence posts and the like - the thread sandwich is almost dry - and I'll have fun thinking about where to use it over the next few days ... weeks ... whenever.


While the bread was proving, I got out 9 balls of blue yarn that have been occupying space int he cupboard ... for some time and decided to make a marriage of yarns and a good piece of soluble stuff - and am making another scarf - this time leaving the ends free rather than adding them on after the fact.  Stitching is in lovely King Tut - a variegated blue - and will keep me off the streets today at least.
Posted by Unknown at 16:29

Ali, try a size 16 needle for the metallic & lower the top tension.

I don't know. I leave you for a couple of days and I nearly missed another visit to the U.S. What a treat your blog is.

Thanks for the helpful comments - Sue and Maxine - I've gone up to a bigger needle, backed off the top tension a bit and only using one of the thread guides immediately before the needle. It's a miracle. Thank you so much.